As we leave winter behind us we are looking forward to our annual Spring concerts at Taverham Village Hall on March 27th and 28th. The band has been rehearsing for the shows for several weeks now and we really do have a great selection of tunes for you. We also have a few surprises lined up, coupled with our traditional brand of humour !

Many of you have asked how we prepare for our shows so here is a brief insight!

The band rehearses every Tuesday, at Drayton School, with Ian conducting the Junior Band for the first part of the evening. He is helped by some of the adult members to encourage and support the youngsters. The main band rehearsal then follows, with Ian putting the band through their paces, introducing new music, and going through some of the more demanding sections. It is very enjoyable but can, of course, be very demanding after many have put in a full day’s work elsewhere. However, Taverham Band has always prided itself on the high level of commitment shown by the members to ensure that we continue to provide you with the very best entertainment and quality.

The social side of the band has always been very important too and many of the members meet at the Red Lion to unwind after the rehearsal ! 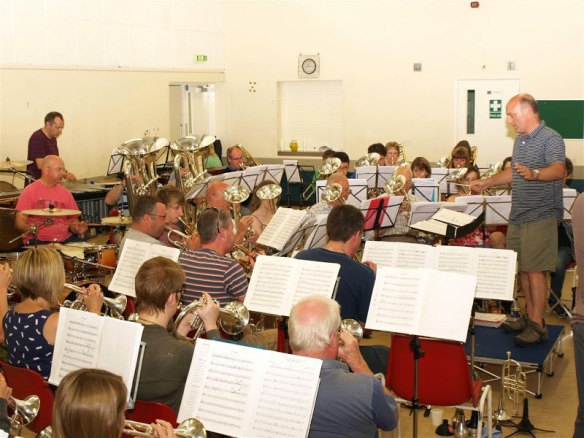 Ian, seen here putting the band through their paces !

Finally, the “eagle eyed” among you may have spotted our drummer, John Clarke playing drums on Channel 4’s  “Come Dine With Me” recently, when he performed with “The He Hews”

We look forward to seeing you at our Spring Concerts !

Finally, we were saddened to hear of the passing of Life Vice-President Geoff Townsend,who along with Phil Robbins, Alan Townsend and Roy Smith founded Taverham Band some 40 years ago.  Geoff was the last surviving founder and we send our thoughts to his family.